Special screening presented by realeyz and EXBERLINER in Lichtblick-Kino, Berlin at 20:00 on Sunday, June 5 (original version with English subtitles), followed by a Q&A with the directors. 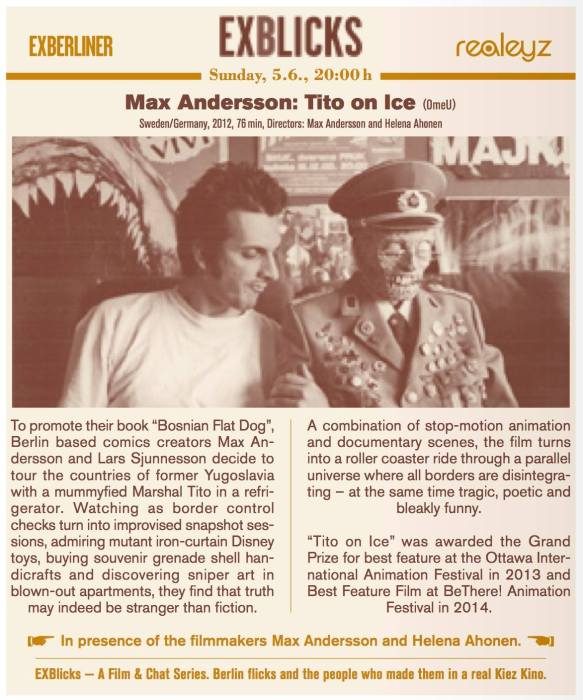 Extensive review of Tito on Ice in Lebanon’s leading English-language newspaper, following the screening at Beirut Animated in October 2015. 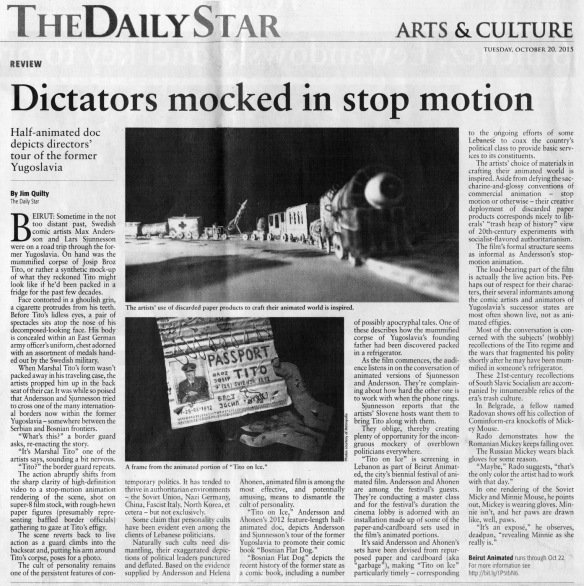 The unconventional and radical approach of TITO ON ICE to history, journalism and documentary filmmaking demanded the creation of an entire world made up of discarded fragments and waste products – little shreds of “reality”, collected and meticulously pieced together again to form a new kind of realism. Designed and created by Max Andersson with contributions by fellow artists Lars Sjunnesson and Gunnar Lundkvist, the sets mix present, past and future locations – geographical as well as psychological – mirrored through several layers of subjectivity. Some of these landscapes and interiors were displayed at exhibitions in Ljubljana and Berlin (where the pictures above were taken).

Following the Canadian Premiere in the capital Ottawa, TITO ON ICE will travel to meet the west coast audiences at Vancouver International Film Festival.

Three screenings are scheduled within the Arts and Letters section:

“Embarking on a barnstorming tour of the former Yugoslavia, graphic novelists Max Andersson and Lars Sjunneson (Bosnian Flat Dog) cart along a macabre papier-mâché “mummy” of Marshal Josip Broz Tito encased in a refrigerator. At border crossings, intimidating guards are reduced to giddy fans, clambering for photos with the late dictator’s effigy. Subsequent stops prove stranger still: artisans incorporate the shells that destroyed their cities into their handicrafts… a makeshift gallery of illustrations is found on the walls of a decimated apartment block… a collector has amassed a menagerie of “mutant” Mickey Mouse figurines originating from former communist countries…

Only heightening their journey’s surreal nature are the astonishing stop-motion animation sequences conceived by Andersson (who shares directing credit with Helena Ahonen). Dramatically shot in 8mm and featuring dozens of sets handcrafted from refuse, these fantastical interludes offer a cracked-mirror reflection of a real world in which recognizable borders—on both maps and in art—have fallen. Furthermore, they pay tribute to the scrappy DIY spirit that inspires individuals to pull themselves from the wreckage and strive to create spaces for art to happen, simply because it’s something that needs to happen. Guided by a propulsive soundtrack of Balkan new wave and punk, Tito on Ice is a freewheeling exploration of the enduring power of icons and the importance of identity, be it national or personal.”

(VIFF review of Tito on Ice)

Until 15 September, a large part of the miniature buildings, vehicles and characters designed by Max Andersson (in part together with Lars Sjunnesson) from recycled materials for the TITO ON ICE movie sets will be on display in Berlin.

For the event, Max Andersson has created a temporary site-specific installation within the construction “Mobile House” by Japanese architect and artist Kyohei Sakaguchi.

The presentation is a part of the exhibition “Comics aus Berlin. Bilder einer Stadt” organized by the Berlin International Literature Festival (ilb), and also includes comics, drawings and prints by Max and other Berlin-based artists. 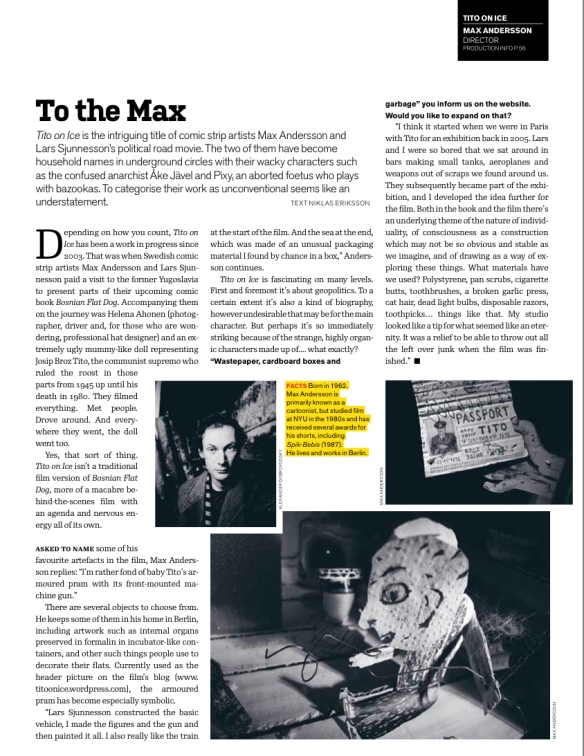 This article was published in Swedish Film Magazine #1 2013. Download the complete magazine here (free). It’s also available as an app for iPad and for Android, also free!

More than fifty different sets populated by countless characters, animals, vehicles and props were built for the stop motion segments of TITO ON ICE. The raw material for this monumental creation was exclusively garbage. Discarded packages, cigarettes (used), toilet paper (not used), and broken household appliances all became part of the foundation of a world that seems simultaneously intimate and alien to the spectator.

The idea first emerged during Tito’s visit to Paris in 2005, as his traveling companions found themselves bored between official appearances of the Mummy Marshal. Prompted by Helena Ahonen to use whatever objects or pieces of trash that were at hand, they would manufacture little bombed-out buildings, paper people and war machinery for their own amusement (and for the neighbouring tables in the various Paris bars where the action unfolded).

This eventually evolved into the vast junk universe that now fills approximately over one third of the movie. While the bulk of the scenery was created by Max Andersson with a substantial contribution by Lars Sjunnesson, guest appearances by other artists can occasionally be traced in the mix – e. g. some prison island extras and an impressive factory in Belgrade with the sign “GRISFETT” (Pig’s Fat) in cyrillic. 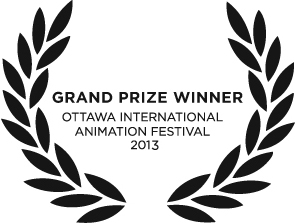 TITO ON ICE
Blog at WordPress.com.